What does my electrical distribution invoice consist of? 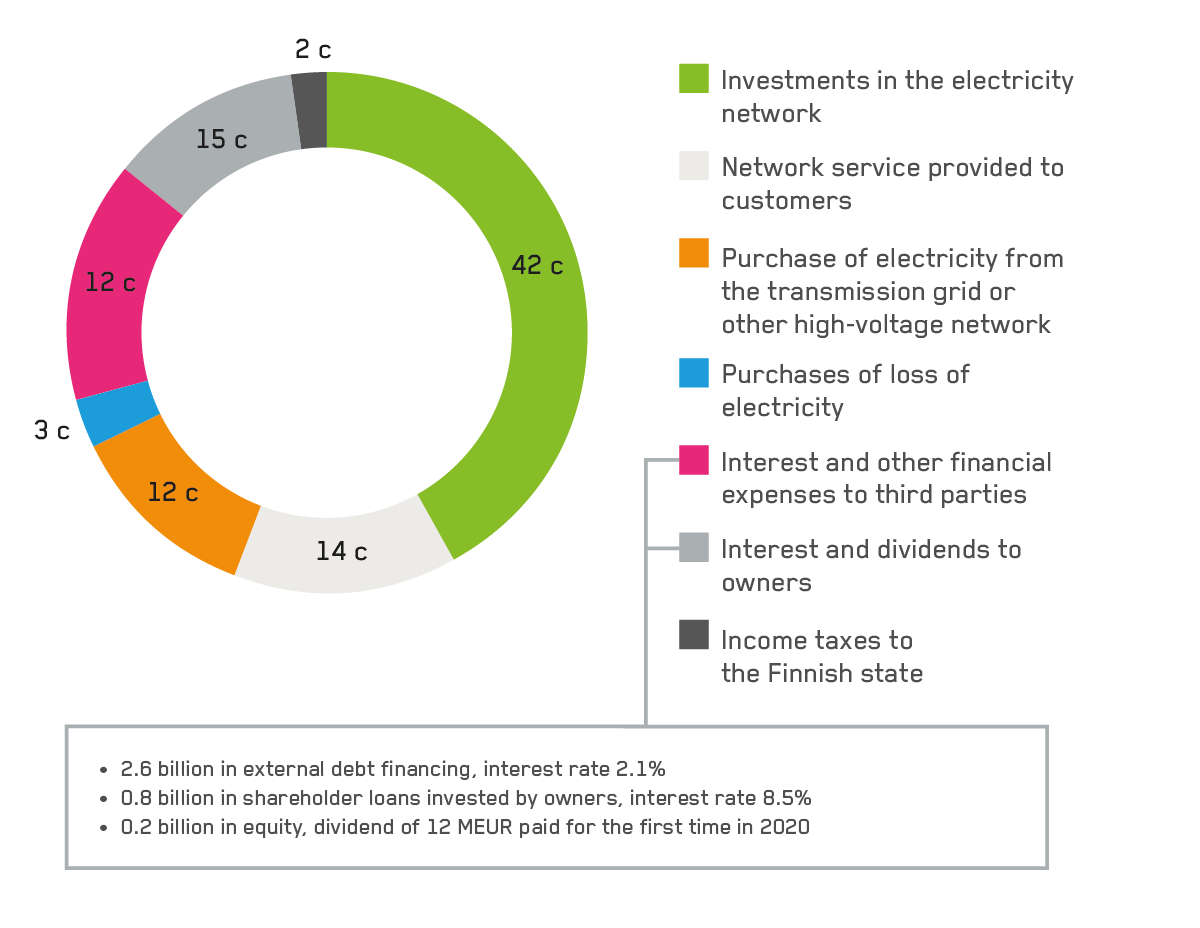 Of every euro you pay, 70 cents is used to improve the network and to provide the network service to our customers. The amount of energy transmitted only impacts around 20 per cent of the costs.

Electricity tax is collected on the electricity distribution invoice, which is forwarded to the state.

With the electricity distribution fee, you get all the services related to electricity network operations

Customer service, electricity metering service, 24/7 fault reporting service and fault repair in all situations are included in the electricity distribution price (also known as network service fee). The fees also cover electricity network maintenance, development, construction of the new network, as well as modernisation of the old network to meet the needs of the future.

Then, what about the connection fee?

The connection fee only covers the costs of connecting to the network, i.e. the construction of the actual electricity connection.

What does the price of electricity distribution look like in the future?

At Caruna Oy, the improvement of the electricity network is about halfway. In addition to improving the weather resistance of electricity distribution, investment needs will also be brought about by the growth of renewable energy production, including, in particular, large wind farms, increased flexibility needs and the ageing of the network. Annual investment volumes have levelled off and will continue to do so in the coming years. Due to this, Caruna Oy's needs for price increases are estimated to be small in the coming years.

Caruna Oy's electricity network is about 80,000 km long and extends from Hanko to Kuusamo. The network area is geographically challenging for electricity distribution, as there are many forests with overhead lines in the area. During storms, trees falling on lines or accumulating heavy snow can cause power outages. The company's network also includes the Turku archipelago and the west coast, which are very sensitive to storm winds.

In Espoo, the population is forecast to grow by an average of 1.6 per cent per year by 2028. There is still room for improvement in the reliability of electricity distribution in the outskirts of the city of Espoo and in the archipelago. In the coming years, Caruna Espoo's investments will primarily focus on enabling clean energy solutions in housing, transport and heat production.

Caruna Espoo's electricity network is 8,100 km long. In the network area, investments per customer are clearly lower than in Caruna Oy. Smaller investments, together with a growing number of customers and declining interest rates, will make it possible to reduce distribution prices.

Comparison of Caruna's distribution prices with other companies in the sector

The price of electricity distribution for Caruna Espoo Oy's 226,000 customers is among the most inexpensive fifth in Finland, as the network has been largely modernised, and the costs of the network are shared by several city residents in a densely populated area. The length of the network per customer is 36 metres and investments EUR 95 per customer (in 2020, a total of EUR 21.4 million). 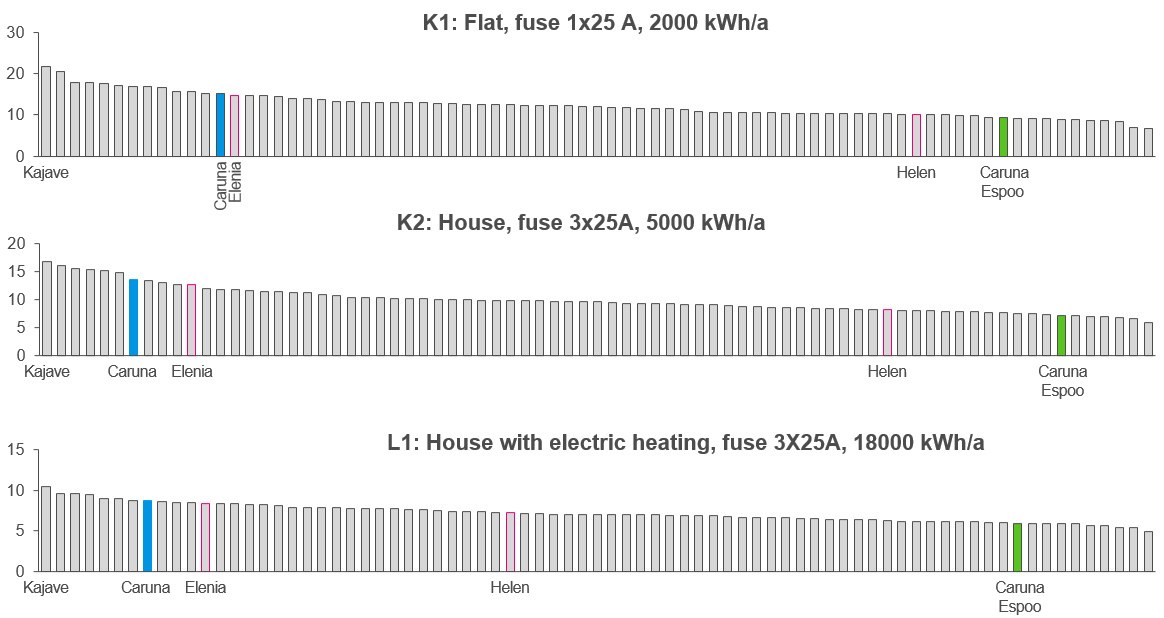 The prices of Finnish distribution companies are public information

The Energy Authority updates the price information on its website, and anyone can check the prices of all electricity distribution companies. Company-specific prices are updated monthly and can be found on the tabs in the table.

In the comparison, the average prices are displayed by type of user. The type user is a customer group that uses electricity in different ways, such as residents in apartment buildings or residents in electrically heated detached houses.

The price includes the average price according to the cheapest product for each customer group with the presented annual consumption. For example, for a user in an apartment building (2,000 kWh) times the unit price of general distribution cnt/kWh + basic fee €/month times 12 + taxes, and finally, the annual cost obtained is divided by gross consumption, resulting in the average price (cents/kWh).

How can I impact my electricity distribution invoice?

With your own electricity consumption, you can impact both the variable (network service) fee (c/kWh) and the electricity tax (c/kWh). These account for about 50 per cent of the annual electricity distribution fee in an apartment building and about 75 per cent in an electrically heated detached house.

In European comparison, the Finnish electricity user is doing quite well. Finns pay a relatively low price for their electricity, although there are large differences between countries. Electricity prices for household users in the EU are highest in Denmark (€0.29/kWh) and lowest in Bulgaria (€0.10/kWh).

In 2020, the Finnish electricity user paid approximately 0.18 euros/kWh for household electricity (including energy, distribution and taxes).

The importance of cost-efficiency will be further emphasised. The focus of Caruna's investments will shift to the low-voltage network, where, for example, local conditions and demographic trends will influence the choice of various solutions.

We are also actively looking for new ways to improve electricity quality and reliability of supply. For example, we will utilise battery storage.

Why do I pay for network improvements?

Today's society is highly dependent on electricity, and uninterrupted electricity supply is a basic precondition for both everyday living and business operations. Our electricity network, built mainly in the 1960s and 1970s, requires continuous and long-term development work, such as the renovation and construction of substations.

We are modernising our electricity network in both urban and sparsely populated areas. You can check the work sites in your neighbourhood on our map service.

Housing costs take up about 18–33 per cent of household net income in 2020–2022. The share varies depending on the type of dwelling and the location, so that middle-income tenants in and owners of apartments pay the most for their housing in relation to income.

In an electrically heated detached house with an annual consumption of 18,000 kWh, electricity distribution fees average EUR 41/month in Caruna Espoo's area and EUR 71/month in Caruna Oy's area. The overall fees including tax are EUR 93 and 130/month, respectively. These represent 9–13 per cent of the total housing costs of EUR 1,000/month.